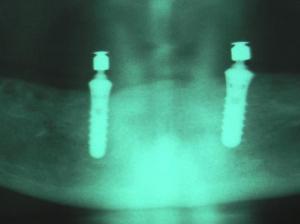 Mrs. N’s treatment at the School of Dentistry began in 1986, she became edentulous in 2004. After a consultation, implant overdentures were suggested as preventive measure to reduce the resorption of the mandibular ridge and to give her the best practice standard available. Two mandibular ITI Straumann implants were placed in March 2006. The maxillary complete denture was an immediate denture, and had been relined once since placement. She presented with tissue conditioner in the mandibular denture, which was placed while the implants integrated.

This course is worth 1.5 CPD hours.